Let us step outside for a moment
As the sun breaks through clouds
And shines on wet new fallen snow,
And breathe the new air.
So much has died that had to die this year.

We are dying away from things.
It is a necessity—we have to do it
Or we shall be buried under the magazines,
The too many clothes, the too much food.
We have dragged it all around
Like dung beetles
Who drag piles of dung
Behind them on which to feed,
In which to lay their eggs.

Let us step outside for a moment
Among ocean, clouds, a white field,
Islands floating in the distance.
They have always been there.
But we have not been there.

We are going to drive slowly
And see the small poor farms,
The lovely shapes of leafless trees
Their shadows blue on the snow.
We are going to learn the sharp edge
Of perception after a day’s fast.

There is nothing to fear.
About this revolution…
Though it will change our minds.
Aggression, violence, machismo
Are fading from us
Like old photographs
Faintly ridiculous
(Did a man actually step like a goose
To instill fear?
Does a boy have to kill
To become a man?)

Already there are signs.
Young people plant gardens.
Fathers change their babies’ diapers
And are learning to cook.

Let us step outside for a moment.
It is all there
Only we have been slow to arrive
At a way of seeing it.
Unless the gentle inherit the earth
There will be no earth.
— May Sarton from Collected Poems 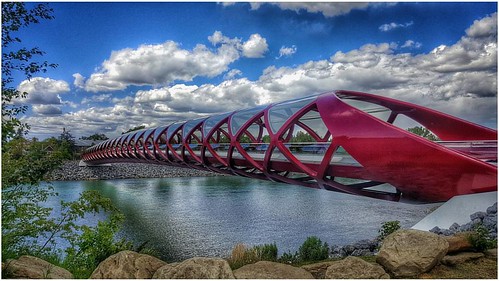 Peace Bridge is a pedestrian bridge, designed by Spanish architect Santiago Calatrava, that accommodates both pedestrians and cyclists crossing the Bow River in Calgary, Alberta, Canada. The bridge opened for use on March 24, 2012. (Wikipedia)